If there was one thing you could’ve done right after the crash of 2008, it would’ve been to buy rental property as it was dirt cheap.

But the fear that was instilled in everybody after the havoc scared many people out of real estate investing for good.

This fear means you missed out on a 100% return on your money, but another opportunity has presented itself…

The 2008 crash is happening all over again and you’re going to make hundreds of thousands from it.

The crash of 2008 was devastating, but I can’t tell you enough how profitable it could’ve been for you if you would’ve invested in real estate shortly after…

But you’ve been handed another chance.

This time, you could make even more money because the bubble is even bigger!

Don’t worry: it’s not happening here in the U.S. Your current property is safe and unemployment is at a 16-year low.

The current euphoria in major Canadian cities resembles an ’07 U.S. when everything was seemingly perfect.

But, as we know, history repeats itself, and it seems like the Canadian real estate market has gotten out of hand.

Take a look at this chart dating from 1975-2016 that provides housing prices in both the U.S. and Canada: 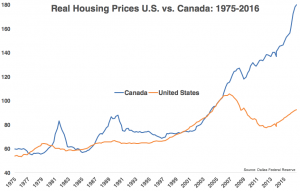 You may notice that the Canadian market seems a little more volatile than the U.S. market, but other than that there’s many similarities.

Both markets moved hand-in-hand during the real estate boom between 1999 and 2007, but you’ll notice when the U.S. market crashed, the Canadian market kept climbing.

Consider the chaos we saw when the U.S. bubble popped. Now look at the size of the Canadian bubble that’s propping up the Canadian market.

And, without getting too technical, I can tell you the Canadian market has followed the same script of the pre-’08 U.S. market with all the subprime loans.

How do home sales fall, but the prices keep going up?

The banks are forcing mortgages on people with adjustable interest rates.

When the Canadian bubble pops, I can’t imagine the heights those interest rates will reach, forcing millions of people into foreclosure and bankruptcy.

But what does that mean to all of us south of the border?

Well, I can tell you now there’s nothing we can do to stop this monstrosity, so we might as well take advantage of a profitable opportunity.

I can’t say exactly when this bubble will pop, but the higher it climbs, the harder it’ll fall.

When it comes to those final stages and begins to free-fall from heights unknown, we sit back and wait for it to hit the floor.

When it does eventually hit the floor (like we saw in 2012), rental properties in Canada will be dirt cheap.

You starting to catch on?

We can make our move by purchasing these properties and renting them out to those who are too shaken up to purchase another property.

The bright side of this is that we’re actually helping the re-inflation of the Canadian economy while putting some cash in our pockets.

It’s not extreme to say that the same type of investment could put you well over half a million in years to come.

As we sit and wait for this bubble to pop, start saving your down payments. There’ll be so many opportunities for profit you might be a little overwhelmed…

But that’s what I’m here for.