Imagine a utility with 35 square miles of solar panels. With today’s efficient panels, that would equal approximately 1.7 gigawatts (GW) of generating power.

If we take an average location in the United States, those panels would produce roughly 12 gigawatt-hours of electricity in a year’s time. That’s about equal to the output of a typical nuclear power plant, according to the Energy Information Administration (EIA).

It has almost double the capacity as second place Costco. To put it in perspective, Wal-Mart has more solar installations than 38 U.S. states, according to the National Renewable Energy Laboratory (NREL). 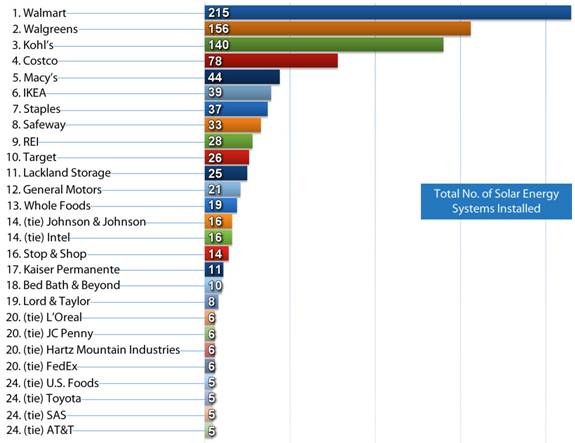 Look at the graph above, courtesy of the Solar Energy Industries Association (SEIA). The top 25 companies listed above have installed more than 950 individual solar systems. The graph below shows how much power in megawatts (MW) those systems are producing. 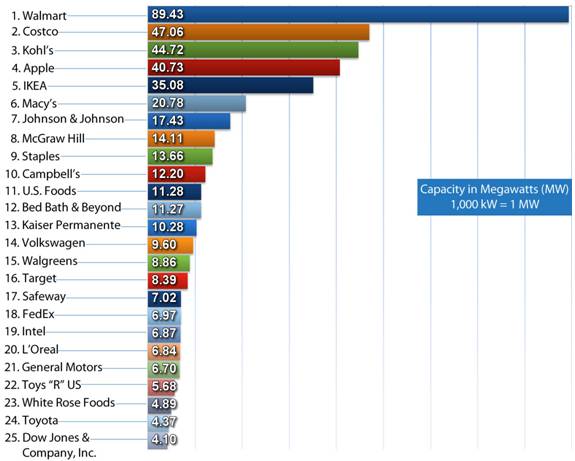 Together, the top 25 companies listed above have deployed 445 MW of solar capacity. That’s a 48% jump from just a year ago. There’s no reason to believe that their deployment won’t continue to rise.

As you can see from the chart below, IKEA has installed solar systems on 89% of its stores. In contrast, Wal-Mart has just scratched the surface. It’s 215 installations represent only 5% of its stores in the United States.

Commenting in the SEIA’s annual Solar Means Business report, SEIA CEO Rhone Resch had this to say: “The list of companies moving to clean, affordable solar energy reads like a ‘Who’s Who’ of the most successful corporations in America.

“These iconic brands are leading the way to reduce our nation’s dangerous dependence on foreign energy sources. They’re also creating thousands of American jobs, boosting the U.S. economy and improving our environment.”

Adam Browning the Executive Director of Vote Solar also commented: “For years, the promise of solar was always ‘just around the corner.’  Well, solar has turned the corner, and found itself on Main Street, USA.

“These companies – titans of American business – may have vastly different products, business models, and geographic locations, but they all have something in common: they know a good deal when they see one, and they are going solar in a big way.” 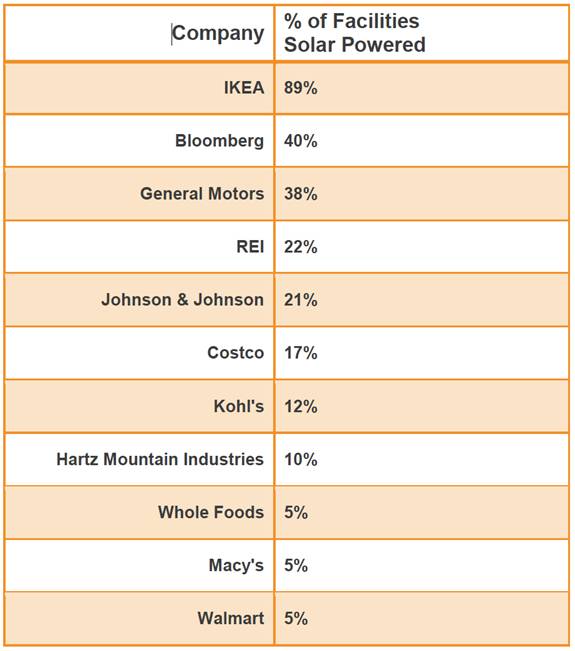 Noticeably absent from the list are big box stores like Home Depot and Lowe’s. You can expect that they will get on board in the not too distant future. Home Depot in particular stands to gain as they are collaborating with installers to sell solar systems to retail customers.

One thing is evident: companies that have deployed solar systems continue to add more. With solar panel costs plummeting 60% in the last few years and solar installation costs dropping 30%, the cost benefits and the return on the initial investment is even more compelling.

Many of the companies that install solar on their rooftops actually don’t own the panels. They lease them in return for lower electricity rates.

SolarCity Corp (NASDAQ:SCTY) is a pure-play in the solar leasing space. It’s another brainchild of Elon Musk, the founder of Tesla Motors Inc. (NASDAQ:TSLA).

SolarCity leases systems to residential, commercial and government customers. The leases are generally 20 years in length. As of the end of 2012, SolarCity was operating 14 states.

SolarCity has a partnership with Home Depot to sell its products in over 450 stores. Shea Properties, Taylor Morrison, Pulte Homes, and Toll Brothers are all big homebuilders installing SolarCity products on residential dwellings.

Investors interested in the fast-moving solar space might want to consider adding a few shares of SolarCity to their portfolio.