While the S&P has been chopping sideways, the pharmaceutical sector was falling. Since March 5, the SPDR S&P Pharmaceuticals Index (NYSE: XPH) is down 7.9% and that is after a bounce these last few weeks. From March 5 through April 14, the XPH was down 14.5%. The ETF has bounced back over the last few weeks, partially due to some M&A activity within the sector.

If we look at the weekly chart for the XPH, we see that the fund had been on one heck of a bullish run until the recent pullback. From the beginning of 2013 through the March 5 high, the XPH was up just over 85% while the S&P gained just over 28% during the same period. With that kind of performance, it was due for a pullback. 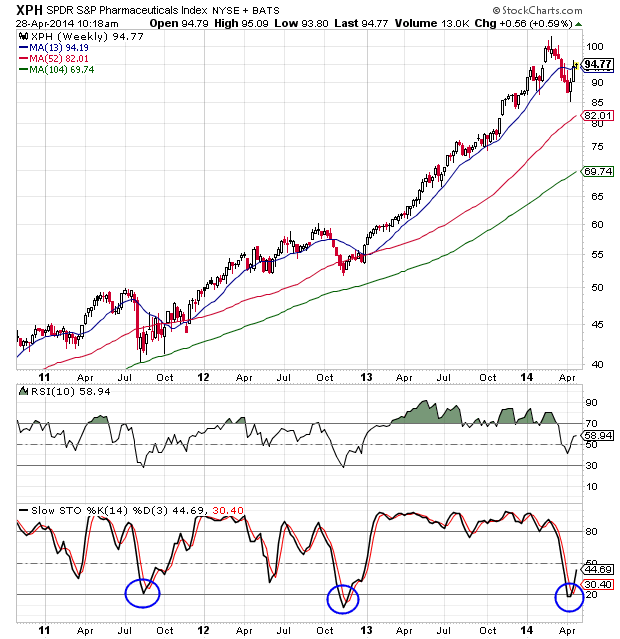 How severe was the recent selloff? For only the third time in the last five years, the slow stochastic readings hit an oversold level. I have marked each of the three times with a blue circle. More importantly, look at what the fund did after it hit the oversold levels. The low in August 2011 was $40.32 and by September 2012, the stock hit a high of $60.12. From the low of $51.75 in November 2012 through the high in March, the fund nearly doubled in price.

As I said last week, the fact that the fund reached an oversold level on an overbought/oversold indicator isn’t reason enough to buy it. You have to look at the whole picture- technical, sentiment and fundamental.

In the article from last week, Use a Three-Pronged Approach to Analyze Stocks, I talked about sentiment indicators and how using them as a contrarian indicators is a great benefit. I developed my own sentiment composite indicator that combines the short-interest ratio, the put/call ratio and the analyst ratings into one composite number with weightings for each indicator. What I have seen over the last year and a half since I developed the composite is that the best opportunities come from composite readings above 10.

With the XPH being an ETF, I took the top 10 holdings of the fund and ran the sentiment composite for each stock. The average composite reading for these 10 stocks was 11.2. The highest reading was 21.03 and the lowest reading was 3.95.

So we have an industry that has seen their stocks get beaten up over the last few months after gaining 100% in just over a year, investors are relatively cautious about the sector and the fundamental performance of the group is good. It seems like the recent selloff is giving investors an opportunity to get in before the next big rally. I can see the XPH gaining at least 50% over the next six to nine months. In my stock picking service, Value Hunter, I tell you when to get in and when to get out of picks like these.