There are plenty of master limited partnerships (MLPs) that offer attractive dividend yields. The problem with MLPs is owning them in your IRA. That’s a problem.

So what other options do energy investors interested in high yields have? I’ve studied the sector carefully and there’s one company that’s my favorite by far.

Take a look at the map below, courtesy of Seadrill. It’s easy to see that the company has its assets deployed in all the major offshore basins. 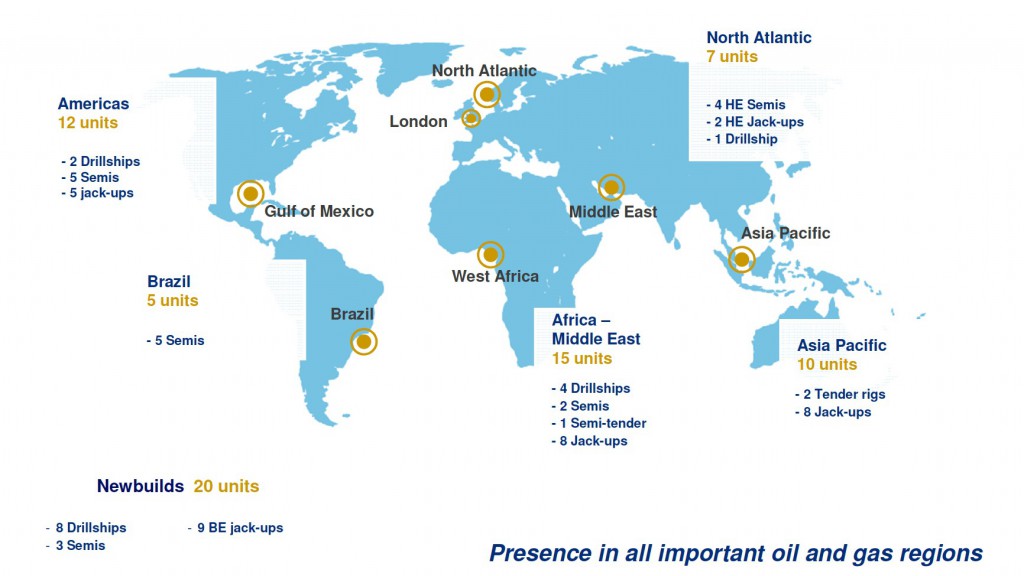 As of this writing, Seadrill’s dividend yield was 11.27%. What’s not to like about that? Seadrill’s often described as the company analysts and investors alike have grown to hate.

Frankly, they’re flat out wrong. They’ve made the wrong assumptions about the deepwater drilling industry, and about Seadrill.

Right now, the demand for deepwater drill rigs has turned soft compared to a few years ago. Most analysts believe it’s going to remain that way for years to come.

Unfortunately for them, they’re missing the boat on Seadrill. They’re focused on Seadrill’s debt and spending levels.

Analysts feel the company is leveraging itself at precisely the wrong time. It’s increasing its balance sheet risk just when the demand is in decline for deepwater drilling rigs and services.

It’s true the company has been taking on a lot of debt. It’s spending that money on growing its fleet of semisubmersibles, tenders and drill ships.

On the surface, to the average analyst or investor who can read a balance sheet, what Seadrill’s doing looks downright ludicrous. But they’re all wrong.

So let’s refigure the math. If we take out the units under construction, Seadrill’s actual utilization rate of units in the water is 95%.

Let’s compare that to one of Seadrill’s competitors. Transocean LTD (NYSE:RIG) is the largest offshore driller. Rigzone’s numbers show Transocean has 98 rigs and tenders. It shows Transocean’s utilization rate at 65%.

Why is Seadrill’s utilization rate of 95% so much higher than Transocean’s 74.4%? Transocean has effectively “moth balled” 18 of its assets.

They are listed as either “cold stacked” or “ready.” Transocean has decided to keep older assets in hopes of being able to quickly add capacity if it needs it when the market turns.

The problem with that strategy, and it’s a big one, is that deepwater drilling customers want the latest and greatest technology and capabilities when they’re ready to drill a well.

Transocean will have to invest more money in old assets to make them usable again. The longer they are in storage, the more money it will take.

Seadrill has taken the opposite approach. As its newer assets come online, its customers will be the benefactors.

While taking on debt seems at first to be a risky strategy for Seadrill, I believe it’s going to pay off in spades.

Any upcoming softness in the industry is going to be felt by companies like Transocean who have older, out-of-date equipment. That’s why Seadrill’s a better bet.

Seadrill has an excellent track record of contracting its assets before they even hit the water. According to the company, available time for its floating drill ships is 97% for 2014 and 65% for 2015.

Its semisubmersibles are contracted for 84% and 67% of the available time for 2014 and 2015 respectively. There’s every reason to expect Seadrill’s excellent contractual record to continue with new assets.

Moving forward, Seadrill’s newer, smaller fleet is going to allow it to take market share from competitors. That’s going to keep its utilization rates higher than others.

That will translate right to the bottom line. That, combined with Seadrill’s outstanding dividend yield makes it one of the top growth and income stories in the energy sector.

In my Wealth from Power newsletter, we’re capitalizing on our newfound energy surplus here in the U.S.

How are we doing? We’re five for five. That’s right, we have five stocks in our Wealth from Power portfolio and they’re all profitable. Three of them have double-digit gains.

Several of our open options positions have gains over 200%. We just added a sixth stock to our portfolio this week. To find out how you can get in on the profits, check your subscriber email for an exclusive invitation.