Investors who follow oil and gas shale development are familiar with the Marcellus and Utica Shales in Pennsylvania and Ohio. Their development is well underway.

The same is true for the Bakken in North Dakota and the Eagle Ford, Barnett and Permian Basins in Texas. Other U.S. shale plays with active drilling and production include, but are not limited to, the Niobrara in Colorado, the Fayetteville in Arkansas and the Woodford in Oklahoma.

However, the shale plays listed above could pale in comparison to one of the newest shale plays. It’s so new that experts are still debating how much oil and gas it contains.
BMO Capital Markets has conducted extensive research on the play. It concluded that the gas in place might be as high as 750 trillion cubic feet (Tcf).

It’s about the size of South Korea, and it’s called the Duvernay Shale. It belongs to our northern neighbor, Canada. During 2011 and 2012, exploration and production (E&P) companies spent about $3.2 billion snapping up acreage.

Look at the map below courtesy of Mooncor Oil and Gas Corp. As you can see, the Duvernay sits just east of the Rocky Mountains. It’s so big, it nearly covers the entire province of Alberta. 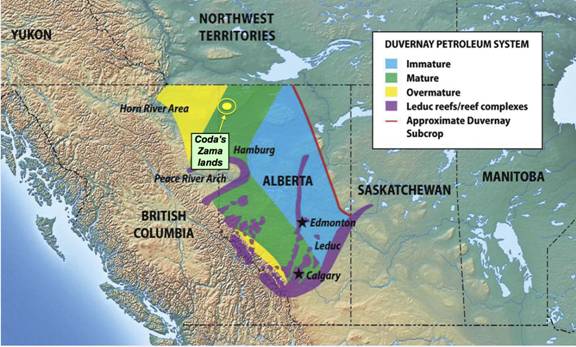 Talisman Energy Inc. (NYSE:TLM) is one of a number of players drilling in the Duvernay. In a recent interview, Hal Kvisle, Talisman’s CEO, said, “The Duvernay is about as interesting and exciting a play as I’ve ever seen.”

Chevron Corporation (NYSE:CVX) is betting big on Duvernay. It holds 325,000 acres. It called the results of its initial 12-well exploratory drilling program “encouraging” in a recent press release. It believes the Duvernay is “a foundation for future growth in Canada.”

For decades, geologists have known about the oil and gas locked inside the Duvernay. In that respect, it’s no different from any other North American shale play.

With the arrival of horizontal drilling and fracking technology, E&P companies began to explore the Duvernay’s complex geology. As with every shale play, finding the sweet spots requires lots of delineation drilling.

Over the last two years, E&P companies have spent north of $2 billion doing just that. The results so far indicate that the Duvernay could surpass the Eagle Ford and possibly even the Permian. Chevron referred to it in its press release as a possible “world-class play.”

Let’s hope Chevron is right, because the Duvernay is all about condensate. Chevron’s initial well reports indicate its wells are producing about 1,300 barrels per day of condensate.

Condensate is what the Duvernay is all about. It’s a very light oil, and it commands a 10% premium over West Texas Intermediate (WTI) crude in Canada.

The reason for the premium is the light condensate is needed to dilute the heavy, thick crude produced by the Canadian oil sands. This allows easier shipment via pipelines to Gulf Coast refineries.

But with an estimated total production of one million barrels of oil equivalent (BOE) from a Duvernay well, it’s well worth it for the companies drilling there. It’s especially true when you consider the 10% premium Duvernay condensate commands on the market.

Right now wells are averaging 60% oil and natural gas liquids (condensate). Based on these production rates and current prices for crude and natural gas, the net present value of a Duvernay well is anywhere from $8 million to as much as $27 million.

Analysts from Dundee Securities have calculated some eye-catching findings from analyzing Duvernay data. They calculate that in the tier one areas of the play, the average internal rate of return (IRR) on individual wells could be as high as 142%.

It’s no wonder that land prices for Duvernay drilling rights are skyrocketing. TD Securities analyzed Duvernay acreage purchases and found that they are rising even faster than Eagle Ford or Bakken prices did.

Who’s Drilling in the Duvernay Today?

Right now, Duvernay drilling, at $15 million per hole, is limited to a select few companies. They’re the ones with large market caps and deep pockets.

Look at the table below, courtesy of BMO Capital Markets. Market caps listed are as of November 12, 2013. Companies highlighted in yellow have publicly announced the intent to seek additional partners. 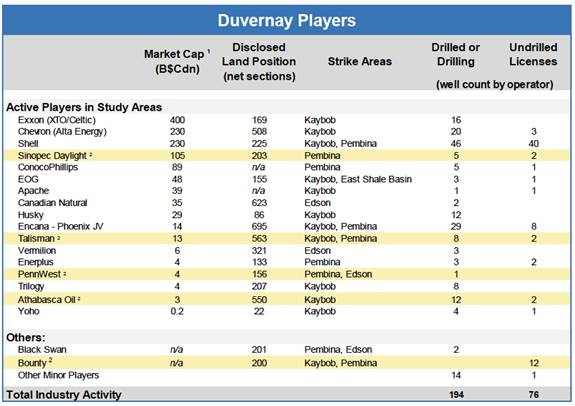 As can be seen from the table, Royal Dutch Shell plc (NYSE:RDS.A) is the big kahuna in the Duvernay when it comes to both drilling and licenses. Many wells drilled during last winter (2012-2013) will shortly come off confidential status.

Once that happens, companies must disclose well data for government and public scrutiny. This will likely drive s flurry of additional drilling and licensing.

Acreage positions held by the majors in the table above will also likely change as much of the land in the play is still held confidentially by land brokers. Ongoing consolidation and drilling will be the order of the day in 2014.

These are all Canadian E&P companies. Most have seen their shares slump compared to American E&P companies. Growing U.S. crude supplies and lack of pipeline infrastructure have contributed to the differential.

A lot of that is going to change in 2014 as new pipelines come online. The other big factor will be the “discovery” of the Duvernay itself.

2014 is likely to be the year the “Next Big Shale Boom” passes to the Duvernay. The Canadian companies listed above could all see a significant jump as the investment community at large piles in.