As the clouds of DC stupidity cleared, markets rose, and the skeptics howled about overvaluations. Now, I can’t predict what will happen in the next day or so (in fact, a healthy pull back is a strong possibility), but I’m going to show you two charts that I believe you’d be foolish to ignore.

Two charts are telling us loud and clear what’s really going on and likely to happen in the coming months, and you could be missing out on big profits if you fail to listen, and instead listen to any doubters on the markets.

Here’s the first chart, of the NASDAQ: 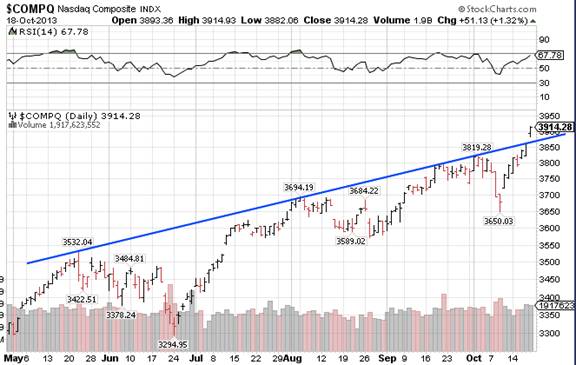 As you can see, on Friday the NASDAQ decisively leaped above its well-established trend line that I drew as a blue straight line. Very bullish to push above such a strong trend line like that, and on strong volume, so there’s conviction here.

You fight this chart at your great peril. Time to pick your favorite tech stocks and ride them (I’m covering some in ‘Money Mentor’ and will be adding more this week).

Midas Legacy traders, including myself, have mentioned repeatedly recently that the tech stocks would lead the way into the last quarter, and there it is before your eyes. 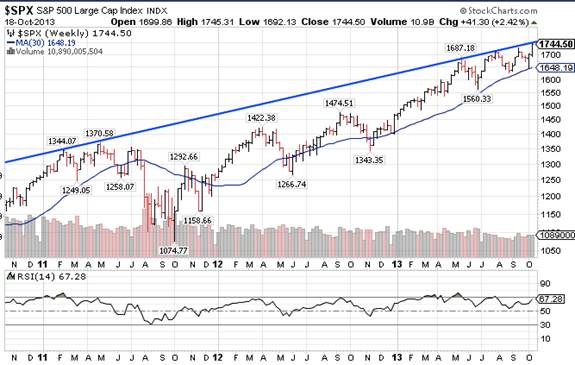 The straight blue line in the long term trend line. This chart is very exciting on two counts:

1. It goes back for two years. The longer a trend line the more important it is.

2. On Friday the S+P pushed up against it, almost to the point.

A break above the current level for the S+P will be extremely meaningful. Can it follow its younger brother, the NASDAQ, with a nice breakout?

Let’s see. But if/when it happens, you’ll have a second nod from the market to enjoy the party, regardless of whatever noise you hear out there on the airwaves to the contrary.