What a difference a few years can make. According to data from the U.S. Energy Information Administration (EIA), the U.S. is on track to be the largest producer of petroleum and natural gas in the world.

The amazing part? It will achieve that title by the end of this year. Russia moves to second place, and Saudi Arabia is a distant third. Look at the graph below courtesy of the EIA.

A lot of the U.S. growth has come from one state. In fact, it’s come from one shale play. We’ll get to which it is in a moment and one of the best ways to play it. First, let’s look at a few startling statistics.

Compare that to both Russia and Saudi Arabia. They have each increased combined hydrocarbon production by a mere one quadrillion Btu since 2008.

Deep in the Heart of Texas

So, which state contains the largest oil field in the country? The Lone Star State. It would seem that Texas is literally floating on oil.

Last year, the Commission approved and issued 4,141 drilling permits. This past May, Eagle Ford production hit a record 580,000 bpd. That’s up 58% from the year before.

However, that’s nothing. Estimates by Bentek Energy show that number increasing to 1.6 million bpd by 2016.

Refiners love the oil coming from the Eagle Ford. It’s light, sweet crude which keeps refining costs low. Its location couldn’t be better either. It’s a mere 100 miles from the major refining complexes in Corpus Christi in Houston.

Unlike the Bakken in North Dakota and Marcellus in Pennsylvania, new pipeline capacity for the Eagle Ford is actually ahead of demand. That’s certainly not the case with the other two plays mentioned.

Another advantage of doing business in Eagle Ford is drilling costs. They’re falling more rapidly than in some of the other plays.

EOG’s lower costs are by no means unique. Other exploration and production (E&P) companies are experiencing the same thing.

Why the big drop in savings? Many of the savings are coming from better drilling techniques. Hydraulic fracturing service costs are falling too. Finally, the more experience operators get in the play, the better they get on completing any given well.

Many of the big E&P companies that own acreage in some of the more gassy plays like the Marcellus, are moving their drill rigs to the Eagle Ford. Wood Mackenzie estimates E&P drillers will sink $28 billion into the Eagle Ford by the end of 2013.

One of the Best Ways to Play the Eagle Ford

Chesapeake Energy Corporation (NYSE:CHK) is one of the big players in the Eagle Ford. It owns 380,000 acres in the wet area of the play. It estimates it has more than 3,400 drilling locations remaining in the Eagle Ford.

It’s compound annual production growth rate for the last two years has been 44% measured on a quarterly basis. The company expects that to continue through 2014.

The map below gives you an idea of Chesapeake’s leasehold acreage in the Eagle Ford play. 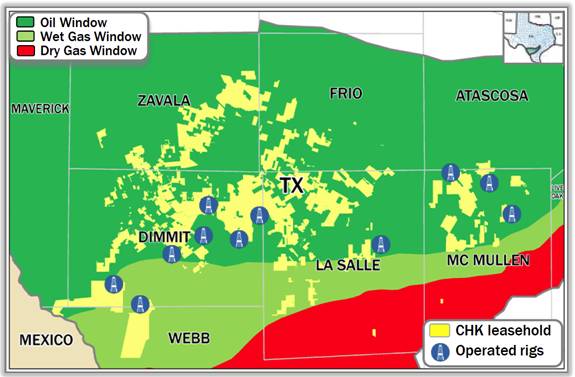 I expect it will continue to move up in the crude rankings for the next several years. Chesapeake is a great way to play the wet portion of the Eagle Ford portion of the U.S. crude oil boom.