Is a cold winter an automatic windfall for energy companies? Not all of them, because a big freeze can have a downside too…

Up until about five years ago, the Gulf of Mexico was the major production region for U.S. oil and natural gas. Horizontal drilling and hydraulic fracking have changed all that.

Natural gas use is up year-over-year, as utilities continue to build natural gas-burning power plants. Bus and truck fleets are continuing to switch to the cheaper, cleaner burning fuel as a replacement for diesel. All this is happening in spite of increasing supplies. Check out the graphs below courtesy of the Energy Information Administration (EIA). 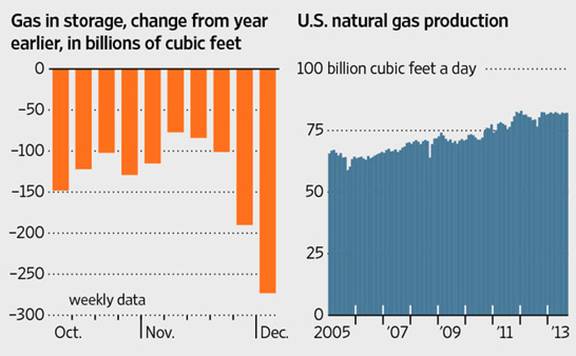 When most natural gas production came from the Gulf, both producers and traders had one eye on the weather during the hurricane season. Now that most natural gas comes from land-based wells, producers have another problem to worry about.

Now they have one eye on the thermometer during the winter. Cold temperature is a double-edged sword for natural gas producers.

The good news is the colder it gets, the more natural gas is needed to heat homes and businesses. The higher demand also sends prices up as well, potentially putting even more money in producer’s pockets.

So where’s the bad news? It’s a winter-only phenomenon called wellhead freeze-off. We’ll jump into more detail on freeze-offs in a moment. First let’s look at this winter’s impact on natural gas supply and demand.

Look at the chart below, courtesy of the EIA. 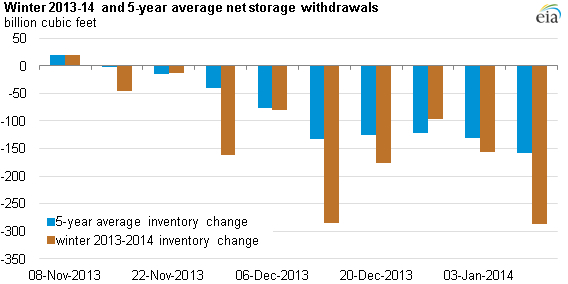 As you can see, this winter has seen a huge negative spike in storage withdrawals. Last week’s record-breaking temperatures covered most of the Mid-West and Northeast.

Both these areas are huge natural gas users. In the Northeast, more than half of residential homes use natural gas as a primary heating fuel. In the Midwest, 68% of homes heat with it.

The frigid temperatures of two weeks ago led natural gas prices higher. They also were responsible for record highs in both demand and storage withdrawals.

The week ending January 10, 2014 saw net withdrawals of 287 billion cubic feet (Bcf). That is the biggest withdrawal since record keeping began 20 years ago. In Chicago, it was so cold, that the Chicago Zoo even brought its polar bear indoors.

That withdrawal is just the latest in a winter already characterized by much larger than average natural gas use. The week ending December 13, 2013 saw net withdrawals of 285 Bcf.

Let’s get back to freeze-offs. What are they? Natural gas coming up the well pipe includes small amounts of moisture.

When temperatures drop below freezing, moisture in well pipes without proper insulation freezes at the surface. This gradually closes off the supply from below.

Exploration and production (E&P) companies operating in Northern states design wellheads to prevent freeze-off from occurring. However, wells in Texas and many other southern states don’t have freeze-off protection.

Production slowdowns from major hurricanes can last several weeks if damage to the production platform is significant. Curtailment of production from freeze-offs generally only last a few days.

Look at the chart below, which compares the 2011 freeze-off to some of the major hurricanes to hit the Gulf of Mexico.

According to the EIA, freeze-offs are generally shorter and smaller in magnitude than hurricane production curtailment. This year’s winter freeze-off could surpass that of 2011.

As of Monday, February NYMEX natural gas contracts were trading for $4.25 per million British thermal units (MMBtu). NYMEX prices are one thing. Delivery prices are another.

In the Midwest, prices generally were about $10 per MMBtu above NYMEX. There are fewer supply constraints in the Midwest.

Should Investors Worry About Freeze-Offs?

The answer is generally no. Most newer wells in freeze-off susceptible areas are designed to continue operating even in extremely low temperatures.

Chesapeake Energy Corporation (NYSE:CHK) is an example of a company that I believe could easily surpass analysts’ Q4 2013 expectations.

The company plans to announce Q4 2013 earnings on February 17, 2014. Now would be a great time to pick up a few shares in anticipation of higher earnings.