Last week in this column, I wrote about analyzing an individual stock and how I went about choosing between stocks. This week I want to go over how I analyze the overall market.

There are two main types of market indicators you need to be aware of and I’ll cover them both in this column. Ignoring one of those indicators is like driving with one eye closed. You’ll only see half the road and wind up wrecking your car.

You could have been invested in all ten of these ETFs and that would have produced a pretty diverse portfolio. Not only would you have been invested in ten different sectors, but you would have had the additional risk reduction of being insulated from single-stock risk by being in ETFs. Even with this diversification plan, your portfolio would have lost approximately half of its value had you not made adjustments.

The point is that all ten sectors moved down together and with the overall market. Sure there were ETFs that performed better than the S&P, but even the best performer of these ten, the XLP, still lost 26.6%. Would you really be happy if you “just” lost 26.6% rather than 50%?

If you want to protect yourself from bear markets like the one mentioned above, you need to pay attention to overall market conditions. I recommend paying attention to the technical indicators, which could predict future price movements by looking at past chart patterns, as well as the sentiment indicators, which show how optimistic or pessimistic people are about current market conditions.

On the charts, there is one simple thing you can do to protect yourself. The chart below shows the S&P 500 with a 3-month (blue line) and 12-month (red line) moving average. Had you reallocated your portfolio in late 2000 and again in late 2007 when the 3-month average made a bearish cross below the 12-month average, you would have missed the bulk of the decline. You would also want to get back in when the 3-month average crossed bullishly back above the 12-month average. You didn’t get out at the exact tops and you didn’t get back in at the exact bottoms, but you would have avoided most of the losses and participated in most of the gains. 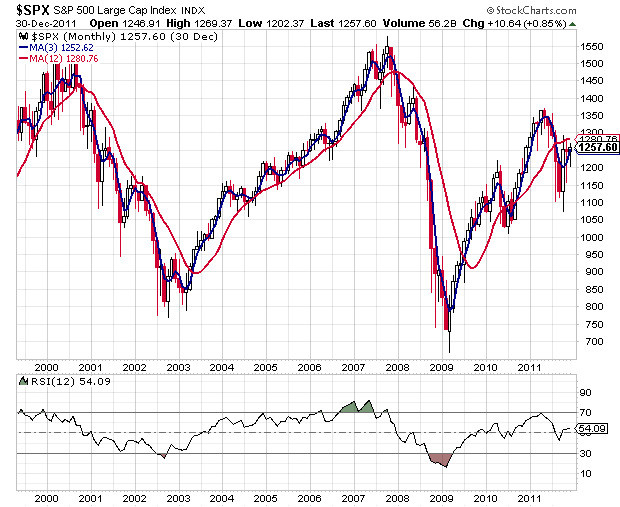 The Investors Intelligence report is a survey of investors and advisors that simply puts the total responses into a bullish percentage and a bearish percentage. I prefer to look at the results in ratio form. The chart below shows the ratio from 2007 through 2011 and you can see how the ratio of bulls to bears was over 3-1 in late 2007, right before the bear market. In other words, there were three times as many optimistic investors as there were pessimistic ones. Then we see how the ratio was down near 0.5-1 when the market bottomed in early 2009.

Unfortunately, the Investors Intelligence report isn’t available for free any longer, but there are other sentiment surveys that you can use such as the AAII Sentiment Survey.

Because this ratio measures the bearishly oriented puts to the bullishly oriented calls, a higher ratio means that investors are more pessimistic and a lower ratio is indicative of investor optimism. Looking at the 21-day moving average on the ratio just in 2007, just before the market topped, the average had hit 0.5995, indicating high investor optimism. Toward the end of the bear market in February 2009, the average was hitting 0.8181.