Over the last 10 weeks, the grain commodities have fallen sharply. Corn, wheat, and soybeans prices have all fallen in the neighborhood of 20% since early May.

But are they going to stay there? I certainly don’t think so.

And when they rebound like I think they might, it will be time for you to make big profits…

The chart below shows the prices of those three commodities and the iPath Dow Jones- AIG Grains Total Return Exchange Traded Note (NYSE: JJG). I included the JJG as it is a way for investors to play the overall grain market without having to have a commodities account. 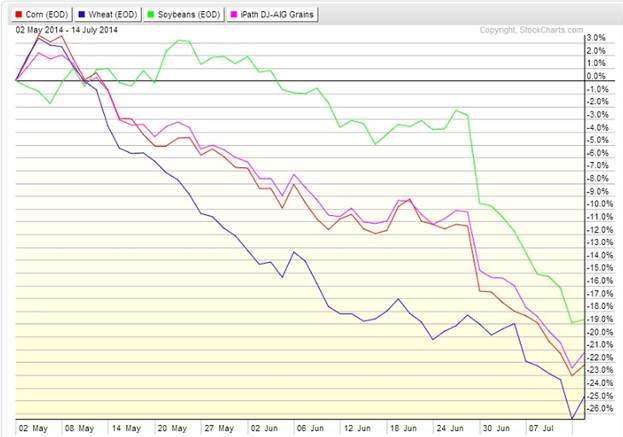 We see in the chart that soybeans are down just approximately 19% while wheat is down almost 25% and corn is right in the middle with a loss of 22.5%. I have been looking for concrete evidence for why the grains are falling so sharply, and the bulk of what I have read has pointed to crop production being higher around the world. Brazil’s corn production is up and wheat production is up in the European Union.

I grew up in Indiana. I didn’t grow up on a farm, but I was surrounded by farms. The house I grew up in has a huge field across the street and another huge field behind it.

While I am not a farmer, nor have I ever been, I have been around these fields enough to know how high the crops should be by this time of the year. In talking with some of my friends in Indiana and Missouri over the last few weeks, they expect to have a pretty good crop this year, but not a record-breaking crop. I am headed to Indiana later this week and will get a first-hand look at the fields in central Indiana.

With the anticipation of huge crop production this year, the sentiment toward the grains has changed dramatically over the last four months as large speculators have shifted from huge bullish positions to more balanced positions. Soybeans have experienced the most drastic change as large speculators have gone from being net long over 200,000 contracts in the beginning of March to a net long position of only 4,478 contracts.

Meanwhile the commercial hedgers have shifted from a net short position of approximately 170,000 contracts to a net long position of over 63,000 positions. 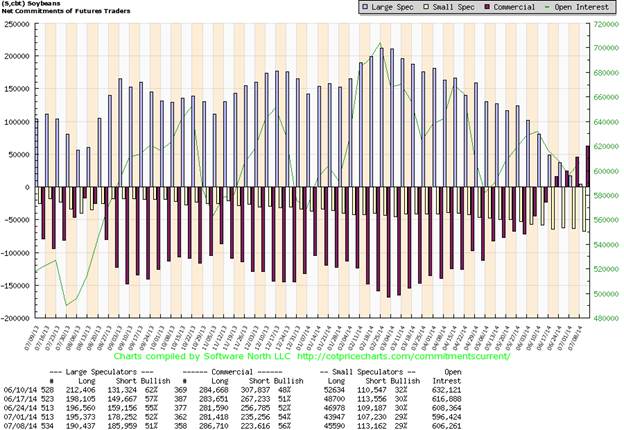 Given the sentiment picture and the oversold levels, I look for the grains to rebound in the next six months. I would not be surprised to see the JJG move back up to the $52 level before the end of the year.

All you need to do is find out WHEN to make your move, which you can do by getting our Stock Code Breaker course. Or let me do it for you by getting my Value Hunter service.