However, another emerging shale play is just starting to gain the attention of E&P companies and investors. The problem is many companies who bought drilling leases a few years ago are now selling them.

Why? Because the “sweet spot” or “fairway” is much smaller in this shale play than in Eagle Ford or the Bakken. Only a few companies have zeroed in on it.

I’m about to show you one of the best ones to consider for your portfolio.

First, let’s talk a little about the shale play itself.

Today, Texas’s motto certainly could be the “oil” state. However, Ohio was actually among the first states where the oil and gas industry really began to flourish.

The shale play that we’re going to focus on is the Utica shale. While the Utica underlies six states, the sweet spot is turning out to be in southeastern Ohio. It also happens to be where the Utica lies closest to the surface.

For most companies, initial results were disappointing. All of a sudden, the Utica acreage-buying boom did a U-turn. Companies began dumping acreage at a fraction of their purchase price.

It turns out the problem with the Utica isn’t a lack of oil and natural gas. In some areas the ground pressures are to low for the oil to flow. Other areas have shale that is too dense, and not easily fractured.

However, there are still 11 E&P companies drilling in the Utica in Ohio. What do they know that the ones who pulled out don’t?

It turns out they know where the sweet spots are. Look at the map below, courtesy of the Energy Information Administration (EIA). 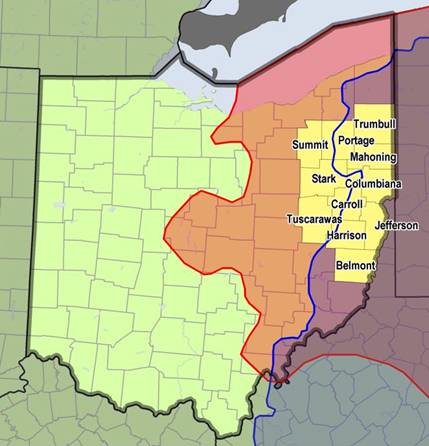 The counties in yellow are turning out to be the liquid-rich sweet spot of the Utica shale. The Ohio Department of Natural Resources reported that in 2012, there were 85 wells drilled in the Utica. Most of those are in the yellow counties.

Devon Energy Corporation (NYSE:DVN) is one of the largest oil and natural gas E&P companies in the U.S. It was one of the 11 companies reporting production results for 2012.

To put it mildly, Devon’s drilling results were extremely poor. It drilled five wells in 2012. It hit no natural gas at all. Only one of the wells produced a small amount of oil. Devon then announced it was selling its Utica acreage and focusing its drilling efforts elsewhere.

Devon’s problem is that its wells weren’t in Utica’s sweet spot. Of the 85 wells I talked about earlier, 76 are producing oil. Only 63 of them are in commercial production.

There is one key data point most analysts missed. Those 63 wells were responsible for 12% of Ohio’s oil production in 2012.

That’s a lot of oil from just a few wells. To put it in perspective, there are more than 60,000 conventional (vertically drilled) oil wells in operation in Ohio.

So, what’s the one company making hay in Ohio?

Back in 2011, Gulfport began buying leasing rights in the Utica shale. It now has 136,000 acres, highly concentrated together. It turns out most if not all of them are in Utica’s sweet spot.

As a result, Gulfport has years and years of drilling opportunities. Unlike some other areas of the country (like the Bakken), Ohio is one of the most economical drilling locations.

Gulfport drilled eight wells in 2012. Those wells produced 63,167 barrels of oil. That doesn’t sound like a lot…until you look at the company’s production logs.

The average number of days in production? Twenty-three. But that data is a little skewed by one well. It was in production for 129 days, producing 12,147 barrels.

The remaining seven wells were producing for an average of only eight days each. Together, they produced 51,020 barrels of oil. That averages out to 6,377 barrels per well per day.

If we annualize the above data, we end up with a whopping 2.3 million barrels of oil. Gulfport’s latest presentation to investors is a real eye-opener.

Lately, Gulfport’s been receiving upgrades from a number of investment firms. Goldman Sachs Group, Northland Securities and Wunderlich have all raised their ratings on the stock.

Right now, one analyst has a “hold” rating on the stock, 19 have a “buy” rating and one has issued a “strong buy.” Gulfport has a robust balance sheet. It expects one of the main drivers of future growth to be its Utica Shale wells.

In my opinion, Gulfport Energy Corporation is the best E&P play in the Utica Shale. Investors who want to get in on the next big shale play should consider adding a few shares of Gulfport to their portfolio.