The U.S. markets have had a heck of a run over the last five years. March 6 marked the five-year anniversary of the exact bottom in the bear market that started in the fall of 2007.

Since then, the S&P 500 Index has gained 185% through the high earlier this month. Think about that — the S&P has nearly TRIPLED in value in only five years.

Today, I’ll explain how rare that feat really is and what it might mean for the market going forward.

Granted, the 2009 market was in the midst of a bear market and had been taken down too far, and the world economy was in what has become known as the “Great Recession.” But for a broad-based index like the S&P to jump 185% in value in just over five years is almost unheard of.

Yes, we have seen indices that represent emerging markets accomplish such a feat, but it is very rare for a developed market.

Lessons from a Rare Market

Since this is such a rare occurrence for developed markets, I decided to look back to see how many times this has happened to the S&P 500.

Going back to 1950 when the S&P was launched and measuring every 60-month time frame from 1955 forward, there have only been 22 instances where the high reading in the 60th month was over 180% higher than the low reading from the period five years ago.

During the first 37 years of the index, there wasn’t a single occurrence where the five-year peak return was over 180%. The first occurrence happened in March 1987 and then again from June through September of that year. I don’t think I need to remind anyone what terrible thing happened in October of 1987.

It would be another 11 and half years before we saw another occurrence of a five-year return of at least 180%, but when it happened, it happened in a big way as the biggest bull market in history hit. From March 1999 through June 2000, the S&P registered 16 straight months where the gain over the period from five years prior was at least 180%.

The first thing that came to my mind about the current bull market and the bull market from the late ‘90s was how different the economic situations were during each period.

I went back and looked at two key economic indicators from the bull market of 1995 through 2000 and at the present one, looking at the same number of readings for both Gross Domestic Product (GDP) and the Unemployment Rate.

Not much of a comparison is there? Is the current bull market justified?

The economy has certainly improved since March ’09, but it isn’t exactly firing on all cylinders still. Yes, the GDP Growth has improved drastically, but the economy is still limping along.

Looking Back at Unemployment Rates

A Reason for Concern

I have my concerns about the market going forward and they lie in the technical picture as well as the investor sentiment picture.

Let’s start with the technical analysis. The S&P has been in overbought territory for over a year now based on the 10-month Relative Strength Index (RSI), which compares recent gains to recent losses. The term “overbought” just means that the price of a stocks have risen to such a degree that the chart’s upper limits have been reached.

The last time the RSI was this elevated for this long was from mid-2006 through mid-2007. If we look at a monthly chart of the S&P, we see the overbought periods of the last 20 years. 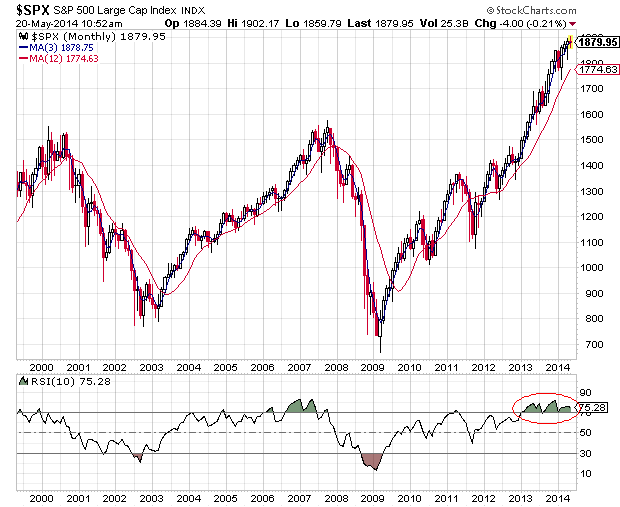 While the S&P has been soaring, the CBOE Volatility Index (VIX) has been languishing. The indicator has been down between 12 and 20 for almost two years now. Sure, the indicator has breached the 20 level a few times, but it hasn’t closed a month above 20 since May 2012.

The last time the indicator stayed this low for so long was back in 2007, right ahead of the credit crisis that started late that summer. Even in the period leading up to the bear market that started in 2000, the VIX was at a higher level than what we are seeing today.